Microsoft has announced that Windows 8.1 will probably be released in October. For current Windows 8 users, it is anticipated to be a free download/upgrade.

As we have said, there are not many huge changes in the operating system at this time.

Some that we have seen are that a Start button has been added. For those used to the Start Button in older versions of Windows, this does not do the same thing.

It takes you back to the Metro screen with the application buttons. 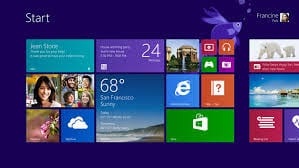 They have changed the Search feature in the Charms menu to look in all categories, instead of just the one selected ( Applications , Settings, Devices) which does make finding things a bit easier.

The existing keyboard shortcuts ( Windows + C for the charms menu, Windows + X for menus that include the control panel) still work.

Most of the other changes would have little or no effect on those using the QuickBooks, Enterprise, or Point of Sale software. They tend to be centered around the Applications and their individual tabs.

If we come across anything pertinent, we will be sure to pass along.